We are happy to announce that Professor Corinna Ulcigrai will join us at the Institute of Mathematics! 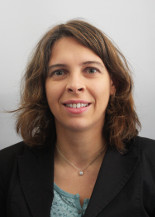 Prof. Dr. Corinna Ulcigrai, b. 1980, was appointed full professor of pure mathematics from 1 August 2018. Prof. Ulcigrai was born in Trieste, Italy and studied mathematics at the Scuola Normale Superiore of Pisa and and the University of Pisa, Italy. She gained her PhD from Princeton University, USA, in 2007 under the supervision of Yakov Sinai (Abel Prize 2014). Since 2007, apart two 6-months postdoctoral positions at the Mathematical Sciences Research Institute in Berkely, California, and at the Institute for Advance Studies, in Princeton, USA, she has been conducting research and teaching at the School of Mathematics at the University of Bristol, where she was initially hired as a lecturer and research fellow, then promoted first to Reader in 2012 and later to Full Professor of Pure Mathematics in 2015.

Her research is in the area of dynamical systems, Teichmueller dynamics and ergodic theory. Prof. Ulcigrai's work on slowly chaotic systems was recognized by several research awards, including the European Mathematical Society prize at the 2012 European Congress of Mathematics, the 2013 Whitehead Prize of the London Mathematical Society, the Leverhulme Prize (2014) and a Royal Society Wolfson Research Merit Award. She is the PI of an European Research Council Grant (Chaotic properties of Parabolic flows), which is now hosted by the University of Zurich.